The first sign of retinitis pigmentosa is usually a loss of night vision, which becomes apparent in childhood. Problems with night vision can make it difficult to navigate in low light. Later, the disease causes blind spots to develop in the side (peripheral) vision. Over time, these blind spots merge to produce tunnel vision. The disease progresses over years or decades to affect central vision, which is needed for detailed tasks such as reading, driving, and recognizing faces. In adulthood, many people with retinitis pigmentosa become legally blind. 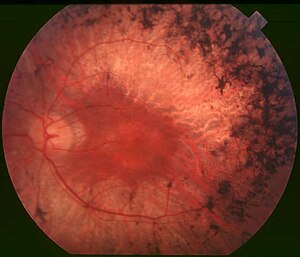 The genes associated with retinitis pigmentosa play essential roles in the structure and function of specialized light receptor cells (photoreceptors) in the retina. The retina contains two types of photoreceptors, rods and cones. Rods are responsible for vision in low light, while cones provide vision in bright light, including color vision.

Mutations in any of the genes responsible for retinitis pigmentosa lead to a gradual loss of rods and cones in the retina. The progressive degeneration of these cells causes the characteristic pattern of vision loss that occurs in people with retinitis pigmentosa. Rods typically break down before cones, which is why night vision impairment is usually the first sign of the disorder. Daytime vision is disrupted later, as both rods and cones are lost.

Retinitis pigmentosa (RP) can be inherited in an autosomal dominant, autosomal recessive, or X-linked manner. The mode of inheritance in a particular family is determined by evaluating the family history and, in some instances, by molecular genetic testing. There are many potential complications in interpreting the family history, so in some cases, identifying the responsible gene with genetic testing is needed. In 10 to 40 percent of all cases of retinitis pigmentosa, only one person in a family is affected. In these families, the disorder is described as simplex. It can be difficult to determine the inheritance pattern of simplex cases because affected individuals may have no affected relatives or may be unaware of other family members with the disease. Simplex cases can also result from a new gene mutation that is not present in other family members.

Tests to evaluate the retina:

There is no effective treatment for this condition. Wearing sunglasses to protect the retina from ultraviolet light may help preserve vision.

Clinical trials are in progress to assess new treatments for retinitis pigmentosa, including the use of DHA, which is an omega-3 fatty acid.

Other treatments, such as microchip implants into the retina that act like a microscopic video camera, are in the early stages of development. These treatments may be useful for treating blindness associated with RP and other serious eye conditions.

A vision specialist can help you adapt to vision loss. Make regular visits to an eye care specialist, who can detect cataracts or retinal swelling. Both of these problems can be treated.

Current research is focused on the development of new treatments including gene therapy, retinal transplantation, and the use of a retinal prosthesis. Stem cell transplantation would involve the injection and integration of stem cells into the retina, in hopes these cells will replace dead cells and provide the missing enzymes and chemicals needed for sight. Gene therapy could potentially be used when the disease-causing mutation is known and would aim to restore production of the missing or abnormal protein. Studies with retinal prosthetics have tested devices that transform light into electrical signals that can be sent directly to the inner retina and brain, avoiding the diseased part of the outer retina. Though challenges remain, preliminary research into these technologies has been promising. The medication(s) listed below have been approved by the Food and Drug Administration (FDA) as orphan products for treatment of this condition.

The disorder will continue to progress slowly. Complete blindness is uncommon.

Retinitis pigmentosa is one of the most common inherited diseases of the retina (retinopathies). It is estimated to affect 1 in 3,500 to 1 in 4,000 people in the United States and Europe.

Retinitis pigmentosa is a rare disease.

Help WikiMD:Join WikiMD as an an editor and help improve the page Retinitis pigmentosa or others.

Quick links: Medicine Portal | Encyclopedia‏‎‏‎ | Gray's Anatomy‏‎ | Topics‏‎ |‏‎ Diseases‏‎ | Drugs | Wellness | Obesity‏‎ | Metabolic syndrome | Weight loss*
Disclaimer: The entire contents of WIKIMD.ORG are for informational purposes only and do not render medical advice or professional services. If you have a medical emergency, you should CALL 911 immediately! Given the nature of the wiki, the information provided may not be accurate, misleading and or incorrect. Use the information on this wiki at your own risk! See full Disclaimer.
Link to this page: <a href="http://www.wikimd.org/wiki/Retinitis_pigmentosa">Retinitis pigmentosa</a>