Sanfilippo syndrome, also known as mucopolysaccharidosis type III (MPS III), is a rare autosomal recessive lysosomal storage disease that primarily affects the brain and spinal cord. It is caused by a buildup of large sugar molecules called glycosaminoglycans (AKA GAGs, or mucopolysaccharides) in the body's lysosomes.

Affected children generally do not show any signs or symptoms at birth. In early childhood, they begin to develop developmental disability and loss of previously learned skills. In later stages of the disorder, they may develop seizures and movement disorders. Patients with Sanfilippo syndrome usually live into adolescence or early adulthood.[1]

The disease manifests in young children. Symptoms usually begin to appear between 2 and 6 years of age.[2] Affected infants appear normal, although some mild facial dysmorphism may be noticeable. Of all of the MPS diseases, Sanfilippo syndrome produces the fewest physical abnormalities. After an initial symptom-free interval, patients usually present with a slowing of development and/or behavioral problems, followed by progressive intellectual decline resulting in severe dementia and progressive motor disease.[3] Acquisition of speech is often slow and incomplete.

The disease progresses to increasing behavioral disturbance including temper tantrums, hyperactivity, destructiveness, aggressive behavior, pica, difficulties with toilet training, and sleep disturbance. As affected children initially have normal muscle strength and mobility, the behavioral disturbances may be difficult to manage. The disordered sleep in particular presents a significant problem to care providers.

In the final phase of the illness, children become increasingly immobile and unresponsive, often require wheelchairs, and develop swallowing difficulties and seizures. The life-span of an affected child does not usually extend beyond late teens to early twenties.

Individuals with MPS Type III tend to have mild skeletal abnormalities; osteonecrosis of the femoral head may be present in patients with the severe form. Optic nerve atrophy, deafness, and otitis can be seen in moderate to severe individuals. Other characteristics include coarse facial features, thick lips, synophrys, and stiff joints.

It is difficult to clinically distinguish differences among the four types of Sanfilippo syndrome. However, type A is usually the most severe subtype, characterized by earliest onset, rapid clinical progression with severe symptoms, and short survival.[4] The median age of death for children afflicted with type A is 15.4 years, ±4.1 years.[5] 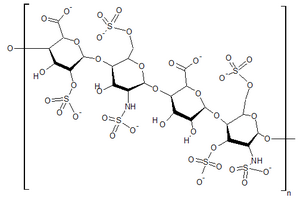 Structure of heparan sulfate, one of the molecules that builds up in the tissues of people with Sanfilippo syndrome

Glycosaminoglycans (GAGs) are chains of sugar molecules. They are found in the extracellular matrix and the cell membrane, or stored in the secretory granules. GAGs are stored in the cell lysosome, and are degraded by enzymes such as glycosidases, sulfatases, and acetyltransferases. Deficiency in these enzymes lead to the four subtypes of MPS III.[4]

Sanfilippo Syndrome Types A, B, C, and D are considered to be clinically indistinguishable, although mutations in different genes are responsible for each disease. The following discussion is therefore applicable to all four conditions.

A urinalysis can show elevated levels of heparan sulfate in the urine.[6] All four types of Sanfilippo syndrome show increased levels of GAGs in the urine; however, this is less true of Sanfilippo syndrome than other MPS disorders. Additionally, urinary GAG levels are higher in infants and toddlers than in older children. In order to avoid a false negative urine test due to dilution, it is important that a urine sample be taken first thing in the morning. The diagnosis may be confirmed by enzyme assay of skin fibroblasts and white blood cells, as well as gene sequencing. Prenatal diagnosis is possible by chorionic villus sampling or amniocentesis.[7]

Treatment remains largely supportive. The behavioral disturbances of MPS-III respond poorly to medication. If an early diagnosis is made, bone marrow replacement may be beneficial. Although the missing enzyme can be manufactured and given intravenously, it cannot penetrate the blood–brain barrier and therefore cannot treat the neurological manifestations of the disease. Along with many other lysosomal storage diseases, MPS-III exists as a model of a monogenetic disease involving the central nervous system.

Several promising therapies are in development. Gene therapy in particular is under Phase I/II clinical trial in France since October 2011 under the leadership of Paris-based biotechnology company Lysogene.[8][9] Other potential therapies include chemical modification of deficient enzymes to allow them to penetrate the blood–brain barrier, stabilisation of abnormal but active enzyme to prevent its degradation, and implantation of stem cells strongly expressing the missing enzyme. For any future treatment to be successful, it must be administered as early as possible. Currently MPS-III is mainly diagnosed clinically, by which stage it is probably too late for any treatment to be very effective. Neonatal screening programs would provide the earliest possible diagnosis.

The flavonoid genistein decreases the accumulation of GAGs.[10] In vitro, animal studies and clinical experiments suggest that the symptoms of the disease may be alleviated by an adequate dose of genistein.[11] Despite its reported beneficial properties, genistein also has toxic side effects.[12]

Several support and research groups have been established to speed the development of new treatments for Sanfilippo syndrome.[13][14][15][16] [17]

The Australian study estimated the following incidences for each subtype of Sanfilippo syndrome:

The condition is named after Sylvester Sanfilippo, the pediatrician who first described the disease in 1963.[2][7][22]

Caregivers for children with Sanfilippo Syndrome face a unique set of challenges because of the disease's complex nature. There is little understanding among clinicians of the family experience of caring for patients with Sanfilippo and how a caregiver's experiences change and evolve as patients age. The burden and impact on caregivers' quality of life is poorly defined and best-practice guidance for clinicians is lacking.[23]

A best-practice guidance to help clinicians understand the challenges caregivers face was published July 2019 in the Orphanet Journal of Rare Diseases by a group of international clinical advisors with expertise in the care of pediatric patients with Sanfilippo, lysosomal storage disorders, and life as a caregiver to a child with Sanfilippo.[23]

The group reviewed key aspects of caregiver burden associated with Sanfilippo B by identifying and quantifying the nature and impact of the disease on patients and caregivers. Recommendations were based on findings from qualitative and quantitative research.[23]

The article's authors reported that: "Providing care for patients with Sanfilippo B impinges on all aspects of family life, evolving as the patient ages and the disease progresses. Important factors contributing toward caregiver burden include sleep disturbances, impulsive and hyperactive behavior, and communication difficulties...Caregiver burden remained high throughout the life of the patient and, coupled with the physical burden of daily care, had a cumulative impact that generated significant psychological stress."[23]

Additionally, the authors call for changing the narrative associated with Sanfilippo: "The panel agreed that the perceived aggressive behavior of the child may be better described as 'physical impulsiveness' and is often misunderstood by the general public. Importantly, the lack of intentionality of the child’s behavior is recognized and shared by parents and panel members...Parents may seek to protect their child from public scrutiny and avoid situations that many engender criticism of their parenting skills."[23]

Quick links: Medicine Portal | Encyclopedia‏‎‏‎ | Gray's Anatomy‏‎ | Topics‏‎ |‏‎ Diseases‏‎ | Drugs | Wellness | Obesity‏‎ | Metabolic syndrome | Weight loss*
Disclaimer: The entire contents of WIKIMD.ORG are for informational purposes only and do not render medical advice or professional services. If you have a medical emergency, you should CALL 911 immediately! Given the nature of the wiki, the information provided may not be accurate, misleading and or incorrect. Use the information on this wiki at your own risk! See full Disclaimer.
Link to this page: <a href="http://www.wikimd.org/wiki/Sanfilippo_syndrome">Sanfilippo syndrome</a>