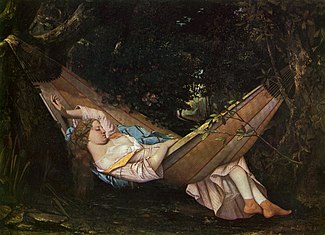 A painting of a young woman taking a siesta. (The hammock, Gustave Courbet (1844).)

A siesta (Spanish pronunciation: [ˈsjesta]) is a short nap taken in the early afternoon, often after the midday meal. Such a period of sleep is a common tradition in some countries, particularly those where the weather is warm.

Because the siesta is the traditional daytime sleep of Spain and, through Spanish influence, of many Hispanic American countries and the Philippines, the word siesta also derives from Spanish, originally from the Latin hora sexta "sixth hour" (counting from dawn, hence "midday rest"). Siesta is also common in Italy (there called riposo), where museums, churches and shops close during siesta so that proprietors can go home for a long lunch and perhaps a snooze during the day’s hottest hours. Einhard's Life of Charlemagne recounts the emperor's summertime siesta: "In summer, after his midday meal, he would eat some fruit and take another drink; then he would remove his shoes and undress completely, just as he did at night, and rest for two or three hours."[1]

Main factors explaining the geographical distribution of the modern siesta are high temperatures and heavy intake of food at the midday meal. Combined, these two factors contribute to the feeling of post-lunch drowsiness. In many countries that observe the siesta, the heat can be unbearable in the early afternoon, making a midday break at home ideal. However, siesta is also practiced in some colder regions, such as Patagonia. This could indicate that the siesta has a stronger relation with culture than with climate.

Older, pre-teenage children are usually capable of napping, but others acquire the ability to nap as teenagers as well.[2]

The timing of sleep in humans depends upon a balance between homeostatic sleep propensity, the need for sleep as a function of the amount of time elapsed since the last adequate sleep episode, and circadian rhythms which determine the ideal timing of a correctly structured and restorative sleep episode. The homeostatic pressure to sleep starts growing upon awakening. The circadian signal for wakefulness starts building in the (late) afternoon. As Harvard professor of sleep medicine Charles A. Czeisler notes, "The circadian system is set up in a beautiful way to override the homeostatic drive for sleep."[3] 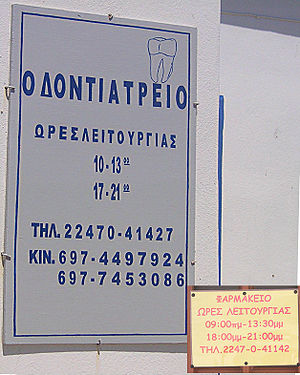 Dentist and pharmacist sharing similar business hours in the island of Lipsi, Greece.

Taking a midday nap is common in a number of tropical and subtropical countries, where the afternoon heat dramatically reduces work productivity. The Washington Post of February 13, 2007 reports at length on studies in Greece that indicate that those who nap have less risk of heart attack.[4]

In the United States, the United Kingdom, and a growing number of other countries, a short sleep has been referred to as a "power nap", a term coined by Cornell University social psychologist James Maas[5] and recognized by other research scientists such as Sara Mednick[6] as well as in the popular press.[7]

The siesta habit has recently been associated with a 37 percent reduction in coronary mortality, possibly due to reduced cardiovascular stress mediated by daytime sleep (Naska et al., 2007).

Listen to this article (info/dl)

This audio file was created from a revision of the article "Siesta" dated 2012-12-2, and does not reflect subsequent edits to the article. (Audio help)
More spoken articles

Quick links: Medicine Portal | Encyclopedia‏‎‏‎ | Gray's Anatomy‏‎ | Topics‏‎ |‏‎ Diseases‏‎ | Drugs | Wellness | Obesity‏‎ | Metabolic syndrome | Weight loss*
Disclaimer: The entire contents of WIKIMD.ORG are for informational purposes only and do not render medical advice or professional services. If you have a medical emergency, you should CALL 911 immediately! Given the nature of the wiki, the information provided may not be accurate, misleading and or incorrect. Use the information on this wiki at your own risk! See full Disclaimer.
Link to this page: <a href="http://www.wikimd.org/wiki/Siesta">Siesta</a>