Tuberculosis (TB) is an infectious disease that damages people’s lungs or other parts of the body and can cause serious illness and death.

TB is caused by the bacterium (germ) Mycobacterium tuberculosis. 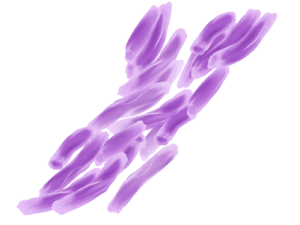 Overall, about 5 to 10% of infected persons who do not receive treatment for latent TB infection will develop TB disease at some time in their lives. For persons whose immune systems are weak, especially those with HIV infection, the risk of developing TB disease is much higher than for persons with normal immune systems.

How tuberculosis is spread

TB is spread through the air when a person with active TB disease spreads the bacteria by coughing, sneezing, shouting, speaking or singing and other people nearby breathe in the bacteria.

The difference between active and latent TB disease

People infected with TB bacteria may not get sick because their bodies are able to fight off the infection. This is called latent or inactive TB, and is not infectious.

People who are infected with the TB bacteria that multiplies and grows where the immune system is not able to fight off the bacteria are said to have active TB. These people will have symptoms and are infectious.

You are most at risk if you: 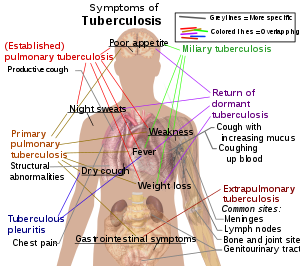 People with TB can: 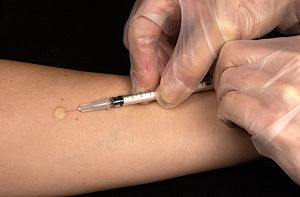 Nurse reading a patient's skin test There are two kinds of tests that are used to detect TB bacteria in the body: the TB skin test (TST) and TB blood tests. A positive TB skin test or TB blood test only tells that a person has been infected with TB bacteria. It does not tell whether the person has latent TB infection (LTBI) or has progressed to TB disease. Other tests, such as a chest x-ray and a sample of sputum, are needed to see whether the person has TB disease.

If a person is found to be infected with TB bacteria, other tests are needed to see if the person has latent TB infection or TB disease.

When TB bacteria become active (multiplying in the body) and the immune system can’t stop the bacteria from growing, this is called TB disease. TB disease will make a person sick. People with TB disease may spread the bacteria to people with whom they spend many hours.

It is very important that people who have TB disease are treated, finish the medicine, and take the drugs exactly as prescribed. If they stop taking the drugs too soon, they can become sick again; if they do not take the drugs correctly, the TB bacteria that are still alive may become resistant to those drugs. TB that is resistant to drugs is harder and more expensive to treat.

TB disease can be treated by taking several drugs for 6 to 9 months. There are 10 drugs currently approved by the U.S. Food and Drug Administration (FDA) for treating TB. Of the approved drugs, the first-line anti-TB agents that form the core of treatment regimens are: