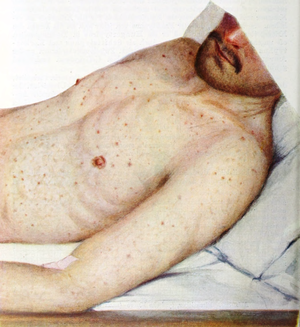 Epidemic typhus, also called louse-borne typhus, is an uncommon disease caused by a bacteria called Rickettsia prowazekii. Epidemic typhus is spread to people through contact with infected body lice. Though epidemic typhus was responsible for millions of deaths in previous centuries, it is now considered a rare disease. Occasionally, cases continue to occur, in areas where extreme overcrowding is common and body lice can travel from one person to another. In the United States, rare cases of epidemic typhus, called sylvatic typhus, can occur. These cases occur when people are exposed to flying squirrels and their nests.

Scrub typhus, also known as bush typhus, is a disease caused by a bacteria called Orientia tsutsugamushi. Scrub typhus is spread to people through bites of infected chiggers (larval mites). The most common symptoms of scrub typhus include fever, headache, body aches, and sometimes rash. Most cases of scrub typhus occur in rural areas of Southeast Asia, Indonesia, China, Japan, India, and northern Australia. Anyone living in or traveling to areas where scrub typhus is found could get infected.

Flea-borne (murine) typhus, is a disease caused by a bacteria called Rickettsia typhi. Flea-borne typhus is spread to people through contact with infected fleas. Fleas become infected when they bite infected animals, such as rats, cats, or opossums. When an infected flea bites a person or animal, the bite breaks the skin, causing a wound. Fleas poop when they feed. The poop (also called flea dirt) can then be rubbed into the bite wound or other wounds causing infection. People can also breathe in infected flea dirt or rub it into their eyes. This bacteria is not spread from person to person. Flea-borne typhus occurs in tropical and subtropical climates around the world including areas of the United States (southern California, Hawaii, and Texas). Flea-borne typhus is a rare disease in the United States.

The American Public Health Association recommends treatment based upon clinical findings and before culturing confirms the diagnosis. Without treatment, death may occur in 10% to 60% of people with epidemic typhus, with people over age 60 having the highest risk of death. In the antibiotic era, death is uncommon if doxycycline is given. In one study of 60 people hospitalized with epidemic typhus, no one died when given doxycycline or chloramphenicol. Some people also may need oxygen and intravenous fluids.

According to the World Health Organization, the current death rate from typhus is about one of every 5,000,000 people per year.

Help WikiMD:Join WikiMD as an an editor and help improve the page Typhus or others.

Quick links: Medicine Portal | Encyclopedia‏‎‏‎ | Gray's Anatomy‏‎ | Topics‏‎ |‏‎ Diseases‏‎ | Drugs | Wellness | Obesity‏‎ | Metabolic syndrome | Weight loss*
Disclaimer: The entire contents of WIKIMD.ORG are for informational purposes only and do not render medical advice or professional services. If you have a medical emergency, you should CALL 911 immediately! Given the nature of the wiki, the information provided may not be accurate, misleading and or incorrect. Use the information on this wiki at your own risk! See full Disclaimer.
Link to this page: <a href="http://www.wikimd.org/wiki/Typhus">Typhus</a>