An injury to the neck (the cervical vertebrae) resulting from rapid acceleration or deceleration (as in an automobile accident); a quick blow delivered with a whip or whiplike object 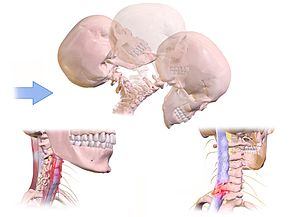 It is characterized by a collection of symptoms that occur following damage to the neck, usually because of sudden extension and flexion.

The disorder commonly occurs as the result of an automobile accident and may include injury to intervertebral joints, discs, and ligaments, cervical muscles, and nerve roots.

Symptoms such as neck pain may be present directly after the injury or may be delayed for several days.

Quick links: Medicine Portal | Encyclopedia‏‎‏‎ | Gray's Anatomy‏‎ | Topics‏‎ |‏‎ Diseases‏‎ | Drugs | Wellness | Obesity‏‎ | Metabolic syndrome | Weight loss*
Disclaimer: The entire contents of WIKIMD.ORG are for informational purposes only and do not render medical advice or professional services. If you have a medical emergency, you should CALL 911 immediately! Given the nature of the wiki, the information provided may not be accurate, misleading and or incorrect. Use the information on this wiki at your own risk! See full Disclaimer.
Link to this page: <a href="http://www.wikimd.org/wiki/Whiplash">Whiplash</a>