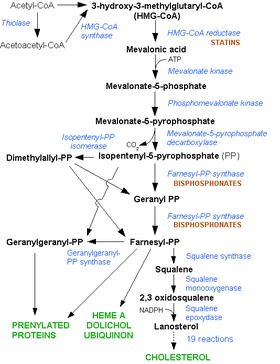 Of the lipoprotein fractions, LDL, IDL and VLDL are regarded as atherogenic (prone to cause atherosclerosis). Levels of these fractions, rather than the total cholesterol level, correlate with the extent and progress of atherosclerosis. Conversely, the total cholesterol can be within normal limits, yet be made up primarily of small LDL and small HDL particles, under which conditions atheroma growth rates would still be high. In contrast, however, if LDL particle number is low (mostly large particles) and a large percentage of the HDL particles are large, then atheroma growth rates are usually low, even negative, for any given total cholesterol concentration.[citation needed]

These effects are further complicated by the relative concentration of asymmetric dimethylarginine (ADMA) in the endothelium, since ADMA down-regulates production of nitric oxide, a relaxant of the endothelium. Thus, high levels of ADMA, associated with high oxidized levels of LDL pose a heightened risk factor for cardiovascular disease.[citation needed]

Increasing clinical evidence[citation needed] has strongly supported the greater predictive value of more-sophisticated testing that directly measures both LDL and HDL particle concentrations and size, as opposed to the more usual estimates/measures of the total cholesterol carried within LDL particles or the total HDL concentration.

^Cholesterol (article) is provided for informational purposes only. No expressed or implied warranties as to the validity of content.
WikiMD is not a substitute for professional advice. By accessing and using WikiMD you agree to the terms of use.
Templates etc. when imported from Wikipedia, are licensed under CC BY-SA 3.0. See full disclaimers.
Retrieved from "http://www.wikimd.org/wiki/index.php?title=Cholesterol&oldid=2029591"
Categories: