Hypermobility, also known as double-jointedness, describes joints that stretch farther than normal. For example, some hypermobile people can bend their thumbs backwards to their wrists, bend their knee joints backwards, put their leg behind the head or perform other contortionist "tricks". It can affect one or more joints throughout the body.

Hypermobile joints are common and occur in about 10 to 25% of the population.[2] It is usually not associated with any symptoms[3] but a minority of people develop other conditions caused by their unstable joints; in such cases, it is known as hypermobility syndrome.[4]

Until new diagnostic criteria were introduced, Hypermobility Syndrome was sometimes often considered identical to Ehlers–Danlos syndrome hypermobile type/EDS Type 3. As no genetic test can identify or separate either conditions and because of the similarity of the diagnosis criteria and recommended treatments, many experts recommend they should be recognized as the same condition until further research is carried out.[5][6]

People with Joint Hypermobility Syndrome may develop other conditions caused by their unstable joints.[4][7] These conditions include:

Those with hypermobile joints are more likely to have fibromyalgia, mitral valve prolapse, and anxiety disorders such as panic disorder.[2]

Hypermobility generally results from one or more of the following:

These abnormalities cause abnormal joint stress, meaning that the joints can wear out, leading to osteoarthritis.

The condition tends to run in families, suggesting a genetic basis for at least some forms of hypermobility. The term double jointed is often used to describe hypermobility; however, the name is a misnomer and should not be taken literally, as hypermobile joints are not doubled/extra in any sense.

Most people have hypermobility with no other symptoms. Approximately 5% of the healthy population have one or more hypermobile joints. However, people with "joint hypermobility syndrome" are subject to many difficulties. For example, their joints may be easily injured, be more prone to complete dislocation due to the weakly stabilized joint and they may develop problems from muscle fatigue (as muscles must work harder to compensate for weakness in the ligaments that support the joints). Hypermobility syndrome can lead to chronic pain or even disability in severe cases. Musical instrumentalists with hypermobile fingers may have difficulties when fingers collapse into the finger locking position. Or, conversely, they may display superior abilities due to their increased range of motion for fingering, such as in playing a violin or cello.

Women with hypermobility may experience particular difficulties when pregnant. During pregnancy, the body releases certain hormones that alter ligament physiology, easing the stretching needed to accommodate fetal growth as well as the birthing process. The combination of hypermobility and pregnancy-related pelvic girdle during pregnancy can be debilitating. The pregnant woman with hypermobile joints will often be in significant pain as muscles and joints adapt to the pregnancy. Pain often inhibits such women from standing or walking during pregnancy. The pregnant patient may be forced to use a bedpan and/or a wheelchair during pregnancy and may experience permanent disability.

Symptoms of hypermobility include a dull but intense pain around the knee and ankle joints and the soles of the feet. The pain and discomfort affecting these body parts can be alleviated by using custom orthoses. 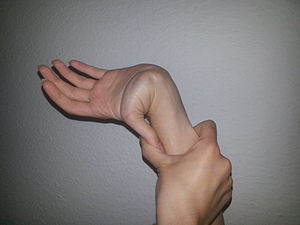 Hypermobility syndrome is generally considered to comprise hypermobility together with other symptoms, such as myalgia and arthralgia. It is relatively common among children and affects more females than males.

Hypermobility can also be caused by connective tissue disorders, such as Ehlers-Danlos Syndrome (EDS) and Marfan syndrome. Joint hypermobility is a common symptom for both. EDS has numerous sub-types; most include hypermobility in some degree. When hypermobility is the main symptom, then EDS/hypermobility type is likely. People with EDS-HT suffer frequent joint dislocations and subluxations (partial/incomplete dislocations), with or without trauma, sometimes spontaneously. Commonly, hypermobility is dismissed by medical professionals as nonsignificant.[13]

Ehlers-Danlos Hypermobility Type can have severe muscloskeletal affects including:

Generalized hypermobility is a common feature in all these hereditary connective tissue disorders and many features overlap, but often features are present that enable differentiating these disorders.[15] The inheritance pattern of Ehlers-Danlos syndrome varies by type. The arthrochalasia, classic, hypermobility and vascular forms usually have an autosomal dominant pattern of inheritance. Autosomal dominant inheritance occurs when one copy of a gene in each cell is sufficient to cause a disorder. In some cases, an affected person inherits the mutation from one affected parent. Other cases result from new (sporadic) gene mutations. Such cases can occur in people with no history of the disorder in their family.

The Beighton score is an edited version of the Carter/Wilkinson scoring system which was used for many years as an indicator of widespread hyper-mobility. Medical professionals varied in their interpretations of the results; some accepting as low as 1/9 and some 4/9 as a diagnosis of HMS. Therefore, it was incorporated, with clearer guidelines, into the Brighton Criteria. The Beighton score is measured by adding 1 point for each of the following:

It is important that hypermobile individuals remain fit - even more so than the average individual - to prevent recurrent injuries. Regular exercise and exercise that is supervised by a physician and physical therapist can reduce symptoms because strong muscles increase dynamic joint stability. Low-impact exercise such as closed chain kinetic exercises are usually recommended as they are less likely to cause injury when compared to high-impact exercise or contact sports.

Heat and cold treatment can help temporarily to relieve the pain of aching joints and muscles but does not address the underlying problems.

Medication is not the primary treatment for hypermobility, but can be used as an adjunct treatment for related joint pain. NSAIDs are the primary medications of choice. Narcotics are not recommended for primary or long term treatment and are reserved for short term use after acute injury.

For some people with hypermobility, lifestyle changes decrease symptom severity. In general, activity that increases pain is to be avoided. For example:

Hypermobile joints occur in about 10 to 25% of the population.[2]

^Hypermobility (joints) (article) is provided for informational purposes only. No expressed or implied warranties as to the validity of content.
WikiMD is not a substitute for professional advice. By accessing and using WikiMD you agree to the terms of use.
Templates etc. when imported from Wikipedia, are licensed under CC BY-SA 3.0. See full disclaimers.
Retrieved from "http://www.wikimd.org/wiki/index.php?title=Hypermobility_(joints)&oldid=1115372"
Categories: