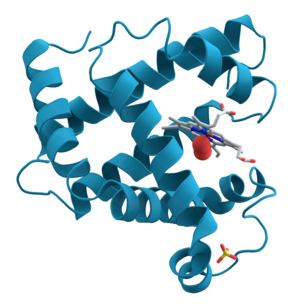 A 3D diagram of the protein myoglobin showing turquoise alpha helices. This protein was the first to have its structure solved by X-ray crystallography. Towards the right-center among the coils, a heme group (shown in grey) with a bound oxygen molecule (red)

Proteins are long-chain molecules built from small units known as amino acids. They are joined together with peptide bonds.

They are biochemical compounds consisting of one or more polypeptides folded into a round or fibrous shape.[1]

Proteins are essential to all cells. Like other biological macromolecules (polysaccharides and nucleic acids), proteins take part in virtually every process in cells:

Proteins have different functions depending on their shape. They can be found in meat or muscle. They are used for growth and repair, as well as for strengthening the bones. They help to make tissue and cells. They are in animals, plants, fungi, bacteria, and also in the human body.

Muscles contain a lot of protein. When protein is digested, it is broken down into amino acids. These amino acids can then be used to build new protein. Proteins form an important part in foods like milk, eggs, meat, fish, beans, spinach, and nuts. There are four factors that determine what a protein will do. The first is the order of the amino acids. There are 20 different types of amino acids. The second is the little twists in the chain. The third is how the entire structure is folded up. The fourth is whether it is made up of different sub-units. Haemoglobin molecules, for example, are made of four sub-units.

Most proteins are enzymes, and mutations may slow them or stop them working. 50% of human cancers are caused by mutations in the tumour suppressor p53.[3][4] p53 is a protein which regulates cell division.[5]

Proteins are necessary in an animal's diets, since animals cannot make all the amino acids they need (they can make most of them). They must get certain amino acids from food. These are called the essential amino acids. Through digestion, animals break down ingested protein into free amino acids. The amino acids are then used in metabolism to make the enzymes and structures the body needs.

The scientist Jöns Jacob Berzelius gave proteins their name,[7] but many other scientists have studied proteins.

^Protein (article) is provided for informational purposes only. No expressed or implied warranties as to the validity of content.
WikiMD is not a substitute for professional advice. By accessing and using WikiMD you agree to the terms of use.
Templates etc. when imported from Wikipedia, are licensed under CC BY-SA 3.0. See full disclaimers.
Other languages:
English
Retrieved from "http://www.wikimd.org/wiki/index.php?title=Protein&oldid=1356533"
Categories: