Clozapine was the first atypical antipsychotic approved for treatment of schizophrenia. 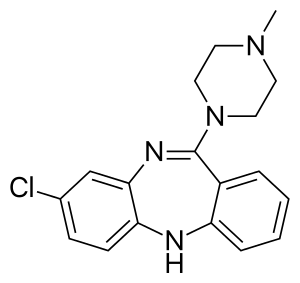 Because it is associated with severe and potentially fatal side effects (agranulocytosis), its use is restricted to refractory schizophrenia, and monitoring during therapy is required. Clozapine therapy is associated with serum aminotransferase elevations and in rare instances has been linked to clinically apparent acute liver injury.

Mechanism of action of Clozapine

Clozapine (kloe" za peen) is an atypical antipsychotic medication that appears to act both as a dopamine (D) and serotonin (5-HT2) receptor antagonist.

Clozapine was introduced into clinical practice in 1971, but subsequently withdrawn in 1975 after reports of fatal agranulocytosis with its use. Nevertheless, because of its potent activity, clozapine was approved for restricted use in refractory schizophrenia in the United States in 1989 and only with surveillance using close monitoring of complete blood counts. As a result, use of clozapine has been limited.

Dosage and administration for Clozapine

Clozapine is available as tablets of 25 and 100 mg in generic forms and under the brand names of Clozaril. The dosage of clozapine varies greatly, from 25 to as much as 900 mg daily based upon clinical response and tolerability.

Side effects of Clozapine

This WikiMD article Clozapine is a stub.
If you are a healthcare professional familiar with the topic Clozapine, or
A subject matter expert or authority on Clozapine, you can help us.
About | Mission | Paid editors welcome!