From WikiMD
Jump to navigation Jump to search
Share
Not to be confused with Granuloma inguinale.

Granuloma annulare is a fairly rare, chronic skin condition which presents as reddish bumps on the skin arranged in a circle or ring.[1] It can initially occur at any age and is four times more common in females. 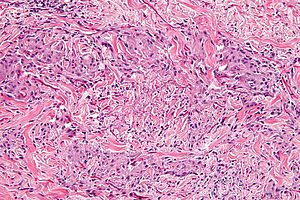 Micrograph showing a palisaded granuloma in a case of granuloma annulare. H&E stain.

Aside from the visible rash, granuloma annulare is usually asymptomatic. Sometimes the rash may burn or itch. People with granuloma annulare usually notice a ring of small, firm bumps (papules) over the backs of the forearms, hands or feet, often centered on joints or knuckles. The bumps are caused by the clustering of T cells below the skin. These papules start as very small, pimple looking bumps, which spread over time from that size to dime, quarter, half-dollar size and beyond. Occasionally, multiple rings may join into one. Rarely, granuloma annulare may appear as a firm nodule under the skin of the arms or legs. It also occurs on the sides and circumferential at the waist and without therapy can continue to be present for many years. Outbreaks continue to develop at the edges of the aging rings.

The condition is usually seen in otherwise healthy people. Occasionally, it may be associated with diabetes or thyroid disease. It has also been associated with auto-immune diseases such as systemic lupus erythematosus, rheumatoid arthritis, Lyme disease and Addison's disease. At this time, no conclusive connection has been made between patients.

Granuloma annulare may be divided into the following types:[2]:703–5

Because granuloma annulare is usually asymptomatic and self-limiting with a course of about 2 years, initial treatment is generally topical steroids or calcineurin inhibitors; if unimproved with topical treatments, it may be treated with intradermal injections of steroids. If local treatment fails it may be treated with systemic corticosteroids.[3][4] Treatment success varies widely, with most patients finding only brief success with the above-mentioned treatments. New research out of India suggests that the combination of rifampin (600 mg), ofloxacin (400 mg), and minocycline hydrochloride (100 mg) once monthly, or ROM therapy, produces promising results.[5] Most lesions of granuloma annulare disappear in pre-pubertal patients with no treatment within two years while older patients (50+) have rings for upwards of 20 years. The appearance of new rings years later is not uncommon.[6]

The disease was first described in 1895 by Thomas Colcott Fox and it was named granuloma annulare by Henry Radcliffe Crocker in 1902.[7]

Quick links: Medicine Portal | Encyclopedia‏‎‏‎ | Gray's Anatomy‏‎ | Topics‏‎ |‏‎ Diseases‏‎ | Drugs | Wellness | Obesity‏‎ | Metabolic syndrome | Weight loss*
Disclaimer: The entire contents of WIKIMD.ORG are for informational purposes only and do not render medical advice or professional services. If you have a medical emergency, you should CALL 911 immediately! Given the nature of the wiki, the information provided may not be accurate, misleading and or incorrect. Use the information on this wiki at your own risk! See full Disclaimer.
Link to this page: <a href="http://www.wikimd.org/wiki/Granuloma_annulare">Granuloma annulare</a>