Template:Infobox alternative medicine A macrobiotic diet (or macrobiotics) is a pescetarian diet (sometimes vegetarian or vegan) fixed on ideas about types of food drawn from Zen Buddhism.[1][2] The diet attempts to balance the supposed yin and yang elements of food and cookware.[3][4] Major principles of macrobiotic diets are to reduce animal products, eat locally grown foods that are in season, and consume meals in moderation.[1]

Macrobiotics writers often claim that a macrobiotic diet is helpful for people with cancer and other chronic diseases, although there is no good evidence to support such recommendations, and that the diet can be harmful.[5][1][6] Studies that indicate positive results are of poor methodological quality.[1] Neither the American Cancer Society nor Cancer Research UK recommend adopting the diet.[7][6]

Macrobiotic diets are based on the concept of balancing yin and yang.[8]

The macrobiotic diet is associated with Zen Buddhism and is based on the idea of balancing yin and yang.[4] The diet proposes 10 plans which are progressed through to reach a supposedly ideal yin/yang ratio of 5:1.[8] The diet was popularized by George Ohsawa in the 1930s and subsequently elaborated by his disciple Michio Kushi.[7] Medical historian Barbara Clow writes that, in common with many other types of alternative medicine, macrobiotics takes a view of illness and of therapy which conflicts with mainstream medicine.[9]

Some macrobiotic proponents, including George Ohsawa, stress that yin and yang are relative qualities that can only be determined in a comparison. All food is considered to have both properties, with one dominating. Foods with yang qualities are considered compact, dense, heavy, and hot, whereas those with yin qualities are considered expansive, light, cold, and diffuse.[12] However, these terms are relative; "yangness" or "yinness" is only discussed in relation to other foods.[13]

Brown rice and other whole grains such as barley, millet, oats, quinoa, spelt, rye, and teff are considered by macrobiotics to be the foods in which yin and yang are closest to being in balance. Therefore, lists of macrobiotic foods that determine a food as yin or yang generally compare them to whole grains.[14]

Nightshade vegetables, including tomatoes, peppers, potatoes, and eggplant; also spinach, beets and avocados are not recommended or are used sparingly in macrobiotic cooking, as they are considered extremely yin.[15] Some macrobiotic practitioners also discourage the use of nightshades because of the alkaloid solanine, thought to affect calcium balance.[16] Some proponents of a macrobiotic diet believe that nightshade vegetables can cause inflammation in the body and osteoporosis.[17] 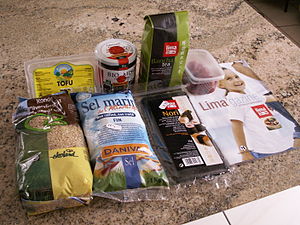 Some general guidelines for the Japanese-style macrobiotic diet are the following (it is also said that a macrobiotic diet varies greatly, depending on geographical and life circumstances):[18]

Fish and seafood, seeds and nuts, seed and nut butters, seasonings, sweeteners, fruits, and beverages may be enjoyed occasionally, two to three times per week. Other naturally-raised animal products may be included if needed during dietary transition or according to individual needs.

Cooking utensils should be made from certain materials such as wood or glass, while some materials including plastic, copper, and non-stick coatings are to be avoided.[3] Electric ovens should not be used.[3]

The macrobiotic way of eating was developed and popularized by the Japanese. During the Edo period in Japan peasants were not allowed[dubious – discuss] to eat meat[citation needed] and had a diet based on staples of rice and soybeans. According to some macrobiotic advocates, a majority of the world population in the past ate a diet based primarily on grains, vegetables, and other plants. Because the macrobiotic diet was developed in Japan, Japanese foods that are thought to be beneficial for health are incorporated by most modern macrobiotic eaters.[19][20]

The American Cancer Society recommends "low-fat, high-fiber diets that consist mainly of plant products"; however, they urge people with cancer not to rely on a dietary program as an exclusive or primary means of treatment.[7] Cancer Research UK states, "There is no scientific evidence to prove that a macrobiotic diet can treat or cure cancer or any other disease".[6]

The following nutrients should be monitored especially in children, because of their importance in facilitating growth and function: calcium, protein, iron, zinc, vitamin D, vitamin B12, riboflavin, vitamin A, omega-3 fatty acids.[21]

Fish provides vitamin B12 in a macrobiotic diet,[22] as bioavailable B12 analogues have not been established in any natural plant food, including sea vegetables, soya, fermented products, and algae.[23] Although plant-derived foods do not naturally contain B12, some are fortified during processing with added B12 and other nutrients.[24] Vitamin A, as its precursor beta-carotene, is available from plants such as carrots and spinach.[25] Adequate protein is available from grains, nuts, seeds, beans, and bean products. Sources of Omega-3 fatty acids are discussed in the relevant article, and include soy products, walnuts, flax seeds, pumpkin seeds, hemp seeds, and fatty fish. Riboflavin along with most other B vitamins are abundant in whole grains. Iron in the form of non-heme iron in beans, sea vegetables and leafy greens is sufficient for good health; detailed information is in the USDA database.[26]

One of the earlier versions of the macrobiotic diet that involved eating only brown rice and water has been linked to severe nutritional deficiencies and even death. Strict macrobiotic diets that include no animal products may result in nutritional deficiencies unless they are carefully planned. The danger may be worse for people with cancer, who may have to contend with unwanted weight loss and often have increased nutritional and caloric requirements. Relying on this type of treatment alone and avoiding or delaying conventional medical care for cancer may have serious health consequences.[7]

Children may also be particularly prone to nutritional deficiencies resulting from a macrobiotic diet.[7]

Macrobiotic diets have not been tested in women who are pregnant or breast-feeding, and the most extreme versions may not include enough of certain nutrients for normal fetal growth.[7]

Quick links: Medicine Portal | Encyclopedia‏‎‏‎ | Gray's Anatomy‏‎ | Topics‏‎ |‏‎ Diseases‏‎ | Drugs | Wellness | Obesity‏‎ | Metabolic syndrome | Weight loss*
Disclaimer: The entire contents of WIKIMD.ORG are for informational purposes only and do not render medical advice or professional services. If you have a medical emergency, you should CALL 911 immediately! Given the nature of the wiki, the information provided may not be accurate, misleading and or incorrect. Use the information on this wiki at your own risk! See full Disclaimer.
Link to this page: <a href="http://www.wikimd.org/wiki/Macrobiotic_diet">Macrobiotic diet</a>