1q21.1 microdeletion syndrome is a chromosome abnormality where a segment of genetic material on the long arm (or q arm) of chromosome 1 at position 21.1 is missing (or deleted). 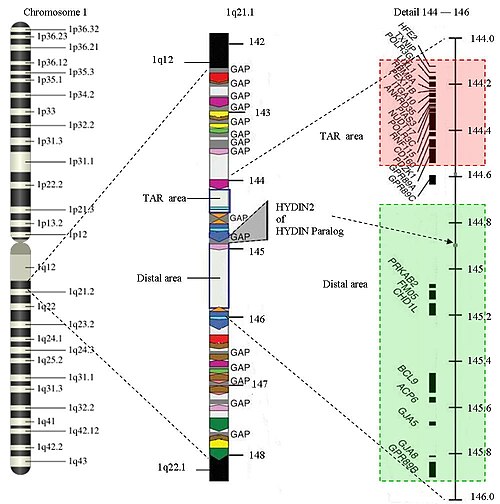 1q21.1 microdeletion is a rare chromosomal change; only a few dozen individuals with this deletion have been reported in the medical literature.

For most diseases, symptoms will vary from person to person. People with the same disease may not have all the symptoms listed. 30%-79% of people have these symptoms

The following are indicated:

^1q21.1 microdeletion syndrome (article) is provided for informational purposes only. No expressed or implied warranties as to the validity of content.
WikiMD is not a substitute for professional advice. By accessing and using WikiMD you agree to the terms of use.
Templates etc. when imported from Wikipedia, are licensed under CC BY-SA 3.0. See full disclaimers.
Retrieved from "http://www.wikimd.org/wiki/index.php?title=1q21.1_microdeletion_syndrome&oldid=2380676"
Categories: