Nortriptyline is a tricyclic antidepressant that is also used in smoking cessation. 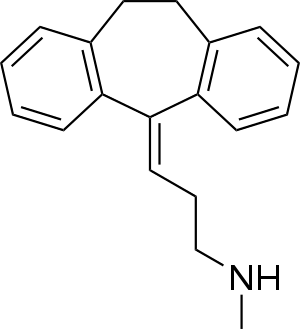 Nortriptyline can cause mild and transient serum enzyme elevations and is rare cause of clinically apparent acute and chronic cholestatic liver injury.

Mechanism of action of Nortriptyline

Nortriptyline (nor trip' ti leen) is a tricyclic antidepressant which acts by inhibition of reuptake of serotonin and norepinephrine in synaptic clefts, thus increasing brain levels of these neurotransmitters. Nortriptyline

Nortriptyline was approved for use in the United States in 1964 for the treatment of depression.

Dosage and administration for Nortriptyline

It is also used for smoking cessation and is commonly used in the United States, with more than 3 million prescriptions being filled yearly. Nortriptyline is available in generic forms and under the brand names of Aventyl and Pamelor in 10, 25, 50 and 75 mg tablets. An oral solution is also available. The typical recommended dose for depression is 25 mg three or four times daily, increasing based upon effect and tolerance to as much as 150 mg daily. The typical dose for smoking cessation is 25 mg daily, gradually increasing to a maximum of 100 mg daily.

Side effects of Nortriptyline

The following are antidepressant subclasses and drugs

This WikiMD article Nortriptyline is a stub. If you are familiar with the topic Nortriptyline, you can help us. Paid editors welcome!

^Nortriptyline (article) is provided for informational purposes only. No expressed or implied warranties as to the validity of content.
WikiMD is not a substitute for professional advice. By accessing and using WikiMD you agree to the terms of use.
Templates etc. when imported from Wikipedia, are licensed under CC BY-SA 3.0. See full disclaimers.
Other languages:
English
Retrieved from "http://www.wikimd.org/wiki/index.php?title=Nortriptyline&oldid=129478"
Category: