Cushing's syndrome is an endocrine disorder caused by prolonged exposure of the body's tissues to high levels of stress harmone cortisol (a harmone produced by the adrenal gland).

It most commonly affects adults between age 20 and 50 years. 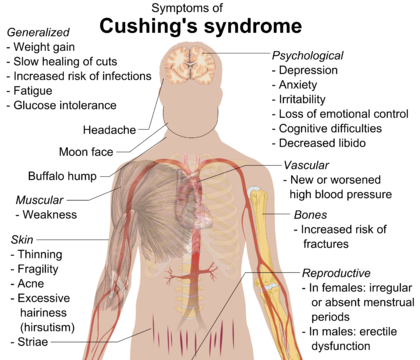 The signs and symptoms of Cushing's syndrome may include: 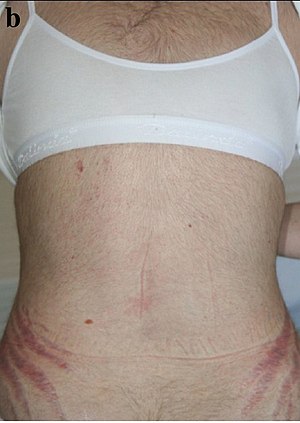 Women with Cushing's syndrome may also experience increased growth of facial and body hair, and menstrual periods may become irregular or cease. Men may have decreased fertility, diminished sexual desire, and/or erectile dysfunction.

Cushing's syndrome  is caused by long-term exposure of the body's tissues to cortisol,a harmone that is naturally produced by the adrenal gland. Exposure to too much cortisol can result from long-term use of corticosteriod medications used to treat inflammatory illnesses. Pituitary adenomas ( of the pituitary gland) or tumors of the adrenal gland may also cause cortisol imbalances.

The first step is to check the medications a person takes. The second step is to measure levels of cortisol in the urine, saliva or in the blood after taking dexamethasone. If this test is abnormal, the cortisol may be measured late at night.[2] If the cortisol remains high, a blood test for ACTH may be done.

Most cases can be treated and cured. If caused by a tumor, it may be treated by a combination of surgery, chemotherapy, and/or radiation. Some, in whom surgery is unable to remove the entire tumor, have an increased risk of death.

The medication(s) listed below have been approved by the Food and Drug Administration (FDA) as orphan products for treatment of this condition. Mifepristone (Brand name: Korlym)Korlym is approved for use in patients with endogenous Cushing's syndrome who have type 2 diabetes or glucose intolerance and are not candidates for surgery or have not responded to prior surgery. Pasireotide (Brand name: Signifor)approved for the treatment of patients with Cushing’s disease for whom pituitary surgery is not an option or has not been curative. Also, December 2014, approved for the treatment of patients with acromegaly who have had an inadequate response to surgery and/or for whom surgery is not an option.

Cushing's syndrome is a rare disease.

^Cushing's syndrome (article) is provided for informational purposes only. No expressed or implied warranties as to the validity of content.
WikiMD is not a substitute for professional advice. By accessing and using WikiMD you agree to the terms of use.
Templates etc. when imported from Wikipedia, are licensed under CC BY-SA 3.0. See full disclaimers.
Retrieved from "http://www.wikimd.org/wiki/index.php?title=Cushing%27s_syndrome&oldid=2053258"
Categories: