The blood is an opaque, rather viscid fluid, of a bright red or scarlet color when it flows from the arteries, of a dark red or purple color when it flows from the veins. It is salt to the taste, and has a peculiar faint odor and an alkaline reaction. Its specific gravity is about 1.06, and its temperature is generally about 37° C., though varying slightly in different parts of the body.

General Composition of the Blood

Blood consists of a faintly yellow fluid, the plasma or liquor sanguinis in which are suspended numerous minute particles, the blood corpuscles the majority of which are colored and give to the blood its red tint. If a drop of blood be placed in a thin layer on a glass slide and examined under the microscope, a number of these corpuscles will be seen floating in the plasma.

The Blood Corpuscles are of three kinds:

Erythrocytes when examined under the microscope, are seen to be circular disks, biconcave in profile. The disk has no nucleus, but, in consequence of its biconcave shape, presents, according to the alterations of focus under an ordinary high power, a central part, sometimes bright, sometimes dark, which has the appearance of a nucleus (Fig. 453, 'a'). It is to the aggregation of the red corpuscles that the blood owes its red hue, although when examined by transmitted light their color appears to be only a faint reddish yellow.

The corpuscles vary slightly in size even in the same drop of blood, but the average diameter is about 7.5μ, 87 and the thickness about 2μ. Besides these there are found certain smaller corpuscles of about one-half of the size just indicated; these are termed microcytes and are very scarce in normal blood; in diseased conditions (e. g anemia), however, they are more numerous. The number of red corpuscles in the blood is enormous; between 4,000,000 and 5,000,000 are contained in a cubic millimetre. Power states that the red corpuscles of an adult would present an aggregate surface of about 3000 square yards.

If the web of a living frog’s foot be spread out and examined under the microscope the blood is seen to flow in a continuous stream through the vessels, and the corpuscles show no tendency to adhere to each other or to the wall of the vessel. Doubtless the same is the case in the human body; but when human blood is drawn and examined on a slide without reagents the corpuscles tend to collect into heaps like rouleaux of coins (Fig. 453, 'b'). It has been suggested that this phenomenon may be explained by alteration in surface tension.

During life the red corpuscles may be seen to change their shape under pressure so as to adapt themselves, to some extent, to the size of the vessel. They are, however, highly elastic, and speedily recover their shape when the pressure is removed. They are readily influenced by the medium in which they are placed. In water they swell up, lose their shape, and become globular (endosmosis) (Fig. 453, c). Subsequently the hemoglobin is dissolved out, and the envelope can barely be distinguished as a faint circular outline. Solutions of salt or sugar, denser than the plasma, give them a stellate or crenated appearance (exosmosis) (Fig. 453, d), but the usual shape may be restored by diluting the solution to the same tonicity as the plasma.

The crenated outline may be produced as the first effect of the passage of an electric shock: subsequently, if sufficiently strong, the shock ruptures the envelope. A solution of salt, isotonic with the plasma, merely separates the blood corpuscles mechanically, without changing their shape. Two views are held with regard to the structure of the erythrocytes. The older view, that of Rollett, supposes that the corpuscle consists of a sponge work or stroma permeated by a solution of hemoglobin. Schäfer, on the other hand, believes that the hemoglobin solution is contained within an envelope or membrane, and the facts stated above with regard to the osmotic behavior of the erythrocyte support this belief. The envelope consists mainly of lecithin, cholesterin, and nucleoprotein.

2.The colorless corpuscles or leucocytes

They consist of minute masses of nucleated protoplasm, and exhibit several varieties, which are differentiated from each other chiefly by the occurrence or non-occurrence of granules in their protoplasm, and by the staining reactions of these granules when present (Fig. 454).

(1) The most numerous (60 per cent.) and important are irregular in shape, possessed of the power of ameboid movement, and are characterized by nuclei which often consist of two or three parts (multipartite) connected together by fine threads of chromatin. The protoplasm is clear, and contains a number of very fine granules, which stain with acid dyes, such as eosin, or with neutral dyes, and are therefore called oxyphil or neutrophil (Fig. 454, P). These cells are termed the polymorphonuclear leucocytes

(2) A second variety comprises from 1 to 4 per cent. of the leucocytes; they are larger than the previous kind, and are made up of coarsely granular protoplasm, the granules being highly refractile and grouped around single nuclei of horse-shoe shape (Fig. 454, e). The granules stain deeply with eosin, and the cells are therefore often termed eosinophil corpuscles

(3) The third variety is called the hyaline cell or macrocyte (Fig. 454, h). This is usually about the same size as the eosinophil cell, and, when at rest, is spherical in shape and contains a single round or oval nucleus. The protoplasm is free from granules, but is not quite transparent, having the appearance of ground glass.

(4) The fourth kind of colorless corpuscle is designated the lymphocyte (Fig. 454, L), because it is identical with the cell derived from the lymph glands or other lymphoid tissue. It is the smallest of the leucocytes, and consists chiefly of a spheroidal nucleus with a very little surrounding protoplasm of a homogeneous nature; it is regarded as the immature form of the hyaline cell. The third and fourth varieties together consitute from 20 to 30 per cent. of the colorless corpuscles, but of these two varieties the lymphocytes are by far the more numerous. Leucocytes having in their protoplasm granules which stain with basic dyes (basophil) have been described as occurring in human blood, but they are rarely found except in disease.

The colorless corpuscles are very various in shape in living blood (Fig. 455), because many of them have the power of constantly changing their form by protruding finger-shaped or filamentous processes of their substance, by which they move and take up granules from the surrounding medium. In locomotion the corpuscle pushes out a process of its substance—a pseudopodium as it is called—and then shifts the rest of the body into it.

In the same way when any granule or particle comes in its way the corpuscle wraps a pseudopodium around it, and then withdraws the pseudopodium with the contained particle into its own substance. By means of these ameboid properties the cells have the power of wandering or emigrating from the bloodvessels by penetrating their walls and thus finding their way into the extravascular spaces. A chemical investigation of the protoplasm of the leucocytes shows the presence of nucleoprotein and of a globulin. The occurrence of small amounts of fat, lecithin, and glycogen may also be demonstrated.

The blood platelets (Fig. 456) are discoid or irregularly shaped, colorless, refractile bodies, much smaller than the red corpuscles. Each contains a central chromatin mass resembling a nucleus. Blood platelets possess the power of ameboid movement. When blood is shed they rapidly disintegrate and form granular masses, setting free prothrombin and the substance called by Howell thromboplastin It is doubtful whether they exist normally in circulating blood. 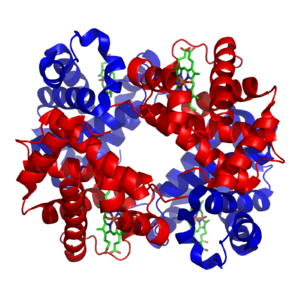 Blood performs many important functions within the body, including:

Lua error in Module:Navbox at line 7: attempt to index a boolean value.

Quick links: Medicine Portal | Encyclopedia‏‎‏‎ | Gray's Anatomy‏‎ | Topics‏‎ |‏‎ Diseases‏‎ | Drugs | Wellness | Obesity‏‎ | Metabolic syndrome | Weight loss*
Disclaimer: The entire contents of WIKIMD.ORG are for informational purposes only and do not render medical advice or professional services. If you have a medical emergency, you should CALL 911 immediately! Given the nature of the wiki, the information provided may not be accurate, misleading and or incorrect. Use the information on this wiki at your own risk! See full Disclaimer.
Link to this page: <a href="http://www.wikimd.org/wiki/The_Blood">The Blood</a>