A sulfate salt form of abacavir, used in the treatment of HIV and AIDS.

It is a nucleoside reverse transcriptase inhibitor analog of guanosine. 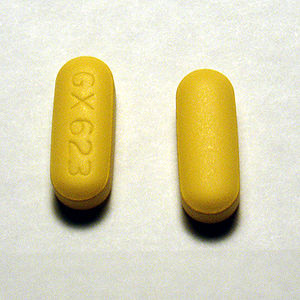 The International Antiviral Society-USA (IAS-USA) maintains a list of updated resistance mutations and the Stanford University HIV Drug Resistance Database offers a discussion of each mutation.

Both the once-daily and twice-daily doses of ABC have demonstrated durable antiviral efficacy in pediatric clinical trials that is comparable to the efficacy observed for other NRTIs in children.

ABC has less of an effect on mitochondrial function than the NRTIs zidovudine, stavudine, or didanosine and less bone and renal toxicity than tenofovir disoproxil fumarate.

Abacavir is marketed as Ziagen

About 60 tablets or capsules abacavir (Ziagen) cost between $559–$670 in the United States.

You can find savings coupons here

This WikiMD article Abacavir is a stub. If you are familiar with the topic Abacavir, you can help us. Paid editors welcome!

^Abacavir (article) is provided for informational purposes only. No expressed or implied warranties as to the validity of content.
WikiMD is not a substitute for professional advice. By accessing and using WikiMD you agree to the terms of use.
Templates etc. when imported from Wikipedia, are licensed under CC BY-SA 3.0. See full disclaimers.
Retrieved from "http://www.wikimd.org/wiki/index.php?title=Abacavir&oldid=2158174"
Categories: