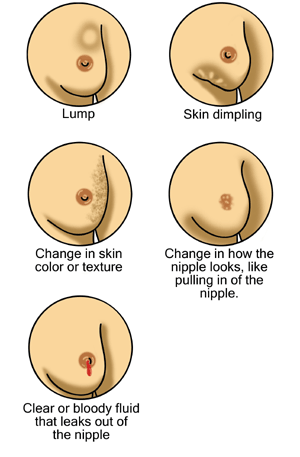 Cancer is a type of disease where cells grow out of control, divide and invade other tissues.

In a person without cancer, cell division is under control. In most tissues, healthy cells divide in a controlled way and copy themselves to create new healthy cells. With cancer, this normal process of cell division goes out of control. Cells change their nature because mutations have occurred in their genes. All the daughter cells of cancer cells are also cancerous.

Difference between cancer and benign tumour

If the abnormal cells do not invade, but just divide and swell up their original tissue, this is not called "cancer". It is called a tumour. Tumours are usually not a threat to life because they can be cut out. However, some tumours occur in places where they cannot be cut out, and they can be fatal. Some brain tumours are of this type.

The symptoms of cancer are caused by the cancerous cells invading other tissues. This is called metastasis. Metastasis is a process in which cancer cells move through the bloodstream or lymphatic system. When this happens, a person's cancer can be spread throughout his or her body. Eventually those other tissues cannot work as well, and the whole body begins to get worse, and may die. 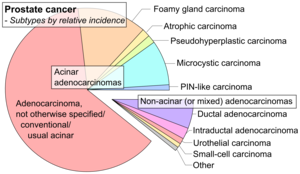 Cancer can affect anybody at any age. Most types of cancer are more likely to affect people as they get older. This is because as a person's DNA gets older, their DNA may become damaged, or damage that happened in the past may get worse. One type of cancer that is more common in young men, rather than older people, is testicular cancer (cancer of the testicles).

Cancer is one of the biggest and most researched causes of death in developed countries.

Cancer is one of the most common causes of death around the world. It causes about 16% (or one out of every six) of all deaths worldwide, according to the World Health Organization. 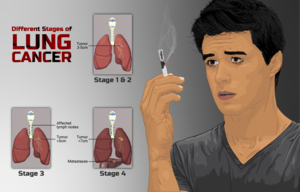 Depiction of a person smoking and stages of Lung Cancer

Other things that are known to be able to cause cancer – or make a person more likely to get cancer – include: radiation including sunlight and X-rays in large or many doses, and exposure to radiation (for example in a nuclear power plant); chemicals and materials used in building and manufacturing (for example, asbestos and benzene); air and water pollution; eating very little fruits and vegetables; obesity; not enough physical activity; drinking too much alcohol; and certain chemicals commonly used at home. Some cancers can also be caused by some viruses and bacteria. Many people who are exposed to these things do get cancer – but some do not

You can search NCI’s website for information on specific types of cancer based on the cancer’s location in the body or by using our A to Z List of Cancers. We also have collections of information on childhood cancers and cancers in adolescents and young adults.

Here are some categories of cancers that begin in specific types of cells: 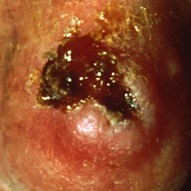 Adenocarcinoma is a cancer that forms in epithelial cells that produce fluids or mucus. Tissues with this type of epithelial cell are sometimes called glandular tissues. Most cancers of the breast, colon, and prostate are adenocarcinomas.

Basal cell carcinoma is a cancer that begins in the lower or basal (base) layer of the epidermis, which is a person’s outer layer of skin.

Transitional cell carcinoma is a cancer that forms in a type of epithelial tissue called transitional epithelium, or urothelium. This tissue, which is made up of many layers of epithelial cells that can get bigger and smaller, is found in the linings of the bladder, ureters, and part of the kidneys (renal pelvis), and a few other organs. Some cancers of the bladder, ureters, and kidneys are transitional cell carcinomas.

Sarcomas are cancers that form in bone and soft tissues, including muscle, fat, blood vessels, lymph vessels, and fibrous tissue (such as tendons and ligaments).

Osteosarcoma is the most common cancer of bone. The most common types of soft tissue sarcoma are leiomyosarcoma, Kaposi sarcoma, malignant fibrous histiocytoma, liposarcoma, and dermatofibrosarcoma protuberans.

Cancers that begin in the blood-forming tissue of the bone marrow are called leukemias. These cancers do not form solid tumors. Instead, large numbers of abnormal white blood cells (leukemia cells and leukemic blast cells) build up in the blood and bone marrow, crowding out normal blood cells. The low level of normal blood cells can make it harder for the body to get oxygen to its tissues, control bleeding, or fight infections.

There are four common types of leukemia, which are grouped based on how quickly the disease gets worse (acute or chronic) and on the type of blood cell the cancer starts in (lymphoblastic or myeloid). 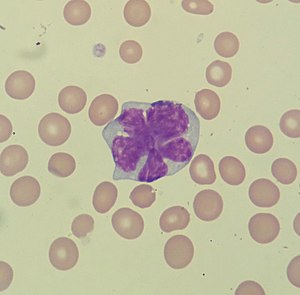 Lymphoma is cancer that begins in lymphocytes (T cells or B cells). These are disease-fighting white blood cells that are part of the immune system. In lymphoma, abnormal lymphocytes build up in lymph nodes and lymph vessels, as well as in other organs of the body.

There are two main types of lymphoma:

Hodgkin lymphoma – People with this disease have abnormal lymphocytes that are called Reed-Sternberg cells. These cells usually form from B cells.

Non-Hodgkin lymphoma – This is a large group of cancers that start in lymphocytes. The cancers can grow quickly or slowly and can form from B cells or T cells.

Our page on multiple myeloma and other plasma cell neoplasms has more information.

Melanoma is cancer that begins in cells that become melanocytes, which are specialized cells that make melanin (the pigment that gives skin its color). Most melanomas form on the skin, but melanomas can also form in other pigmented tissues, such as the eye.

There are different types of brain and spinal cord tumors. These tumors are named based on the type of cell in which they formed and where the tumor first formed in the central nervous system. For example, an astrocytic tumor begins in star-shaped brain cells called astrocytes, which help keep nerve cells healthy. Brain tumors can be benign (not cancer) or malignant (cancer).

Germ cell tumors are a type of tumor that begins in the cells that give rise to sperm or eggs. These tumors can occur almost anywhere in the body and can be either benign or malignant.

Neuroendocrine tumors form from cells that release hormones into the blood in response to a signal from the nervous system. These tumors, which may make higher-than-normal amounts of hormones, can cause many different symptoms. Neuroendocrine tumors may be benign or malignant.

Carcinoid tumors are a type of neuroendocrine tumor. They are slow-growing tumors that are usually found in the gastrointestinal system (most often in the rectum and small intestine). Carcinoid tumors may spread to the liver or other sites in the body, and they may secrete substances such as serotonin or prostaglandins, causing carcinoid syndrome.

Kinds of cancer based on tissue

There are many different kinds of cancers. The most common in the world are:

There is no sure cure for cancer. It can only be cured if all of the cancerous cells are cut out or killed in place. This means that the earlier the cancer is treated, the better the chances are for a cure (because the cancer cells may not have had enough time to copy themselves and spread so much that the person cannot be cured).

There are a few different types of treatments that are used to try to kill cancer cells. These treatments are: 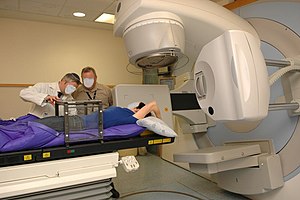 There are a few reasons why treating cancer is complicated. For example:

Many, many people in many countries study cancer and work on finding treatments. There has been some good progress in finding treatments, and many cancers are treated with success. Along with looking for different medical treatments to treat cancer, some studies also look for things that people with cancer can do themselves to try to make themselves healthier. For example, one study showed that if a person with lymphedema (a swelling of the arm linked to breast cancer) lifts weights, he may be able to fight his cancer better than somebody who does not lift weights.

^Cancer (article) is provided for informational purposes only. No expressed or implied warranties as to the validity of content.
WikiMD is not a substitute for professional advice. By accessing and using WikiMD you agree to the terms of use.
Templates etc. when imported from Wikipedia, are licensed under CC BY-SA 3.0. See full disclaimers.
Other languages:
English
Retrieved from "http://www.wikimd.org/wiki/index.php?title=Cancer&oldid=2354747"
Categories: