Pentasomy X is a sex chromosome anomaly caused by the presence of three extra X chromosomes in females (49,XXXXX instead of 46,XX). 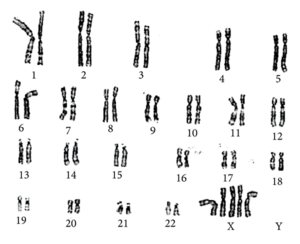 The prevalence is unknown but less than 40 cases have been described in the literature so far.

Diagnosis is suspected based on symptoms and confirmed by chromosomal analysis.

Treatment is based on symptoms.

49,XXXXX syndrome is a rare disease.

^49,XXXXX syndrome (article) is provided for informational purposes only. No expressed or implied warranties as to the validity of content.
WikiMD is not a substitute for professional advice. By accessing and using WikiMD you agree to the terms of use.
Templates etc. when imported from Wikipedia, are licensed under CC BY-SA 3.0. See full disclaimers.
Retrieved from "http://www.wikimd.org/wiki/index.php?title=49,XXXXX_syndrome&oldid=2380700"
Categories: