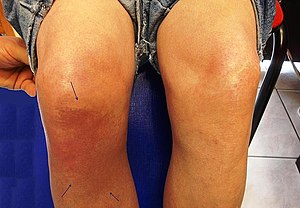 Blazina et al. first used the term jumper's knee in 1973. They also classified the pathology by stage according to the onset of pain in relation to physical activity. This classification along with its modifications is still widely employed. Blazina et al. suggest 4 stages.

It may be useful to classify the pathology into 3 stages according to the duration of symptoms.

Most patients with jumper's knee are managed through medical and rehabilitative treatment in the initial stages of the disease.

^Patellar tendinitis (article) is provided for informational purposes only. No expressed or implied warranties as to the validity of content.
WikiMD is not a substitute for professional advice. By accessing and using WikiMD you agree to the terms of use.
Templates etc. when imported from Wikipedia, are licensed under CC BY-SA 3.0. See full disclaimers.
Retrieved from "http://www.wikimd.org/wiki/index.php?title=Patellar_tendinitis&oldid=2392985"
Categories: